Stats week 1: What a lovely long tail you have!

Before we launched, I made a prediction to the rest of the team—Thomas, Dieter and Joe—that the majority of our traffic, and thus our market, would be American.

Well, I can admit when I’m wrong.

It’s true that American traffic has been the single largest unified segment of our traffic, at 41.4%, but we’ve been receiving significantly more non-US traffic than US traffic (the remaining 58.6%). 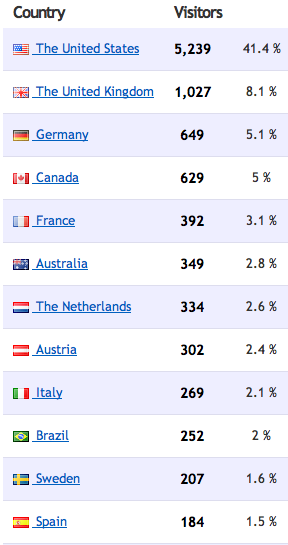 Our long tail is really long, petering out with a lot of “one hit wonders” (sorry!) from 15 countries such as Latvia, Estonia, the UAE, Iran, Afghanistan, and Mauritius.

I don’t know if this is typical or if it may be because we’ve got the attention of more Europeans, thanks to our being in Austria. The fact that the 3rd highest country is Germany is not surprising to me due to the sheer strength of the German design and indie web industry.

Unsurprisingly, Firefox dominates, with IE low down on the ladder at about 6% total for all versions. Safari is only 19%, though, and I thought it would be higher.

Google Chrome’s actually got a very respectable slice with 7%, a greater market share than all types of IE combined. We hadn’t devoted much time to testing in Chrome but now that’ll change.

We had a couple “traffic events”: David mentioned us in a tweet. We got mentioned on Lifehacker and Ajaxian. We were #1 on Delicious popular for a short time. Screenshots of our front page & app have made it onto a number of design gallery sites (the kind without commentary—like CSSMania).

When we heard about the Lifehacker post, we were sure we tried to prepare for an unexpected flood of incoming traffic—thankfully, it wasn’t the case. 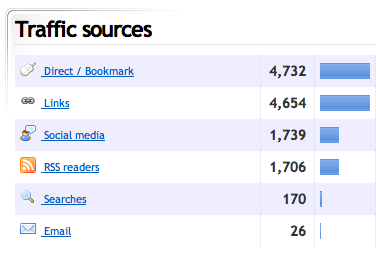 I can only assume that many of the Direct / Bookmark visitors are, in fact, coming from desktop-based RSS readers. Or else people sure do talk about us a lot to their friends.

The US simply doesn’t have a monopoly on edgy web stuff, even if it appears to be the case. We sure have a lot of international visitors. (We’ve noticed some of our most active customers are, too.)

We won’t lose much if we stop supporting IE 6, which we planned to do. (We’ll just be sure to announce it clearly first.) Thank god.

I really wanted to avoid a big launch. We intentionally avoided creating a build up, etc., etc. It mostly worked.

FYI: The screenshots are from our Clicky account. We use it to supplement Google Analytics & are quite happy with it.

Get notified about new articles

Whenever we write a new article, you’ll be the first to know.